The Maxims of Menander 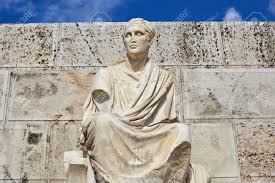 Menander (Menandros) was a Hellenistic Greek dramatist. He was the best-known representative of Athenian New Comedy. He wrote 108 comedies and took the prize at the Lenaia festival eight times. His work was lost during the Middle Ages and only fragments of it have survived to this day. He is known for his moral maxims. Here a some of them:

"Rest assured, for every piece of business the most businesslike thing is to choose the right moment."


"He who labors diligently need never despair; for all things are accomplished by diligence and labor."

"Even God lends a hand to honest boldness."

"Let bravery be thy choice, but not bravado."

"The person who has the will to undergo all labor may win any goal."

Back to main Languages page